Paul Blart is invited to a security convention in Las Vegas. Being a mall cop, he is looked-down upon and underestimated, but this does not hinder the dedicated hero. He tries to relax and make connections with the other copsWhen threats emerge within the hotel, Paul Blart rises to action.

Paul Blart Mall 2 is an action packed film suitable for all ages. Paul Blart is a complex character with relatable traits and a tragic backstory. After the woman of his dreams leaves him after a week of marriage, and his number one influence and roommate, his mother, gets run over by a milk truck, Paul is left a broken man. Paul Blart, as perfect as he is, can almost resemble a human being having difficult trials just like us.


Developed and Published by KID 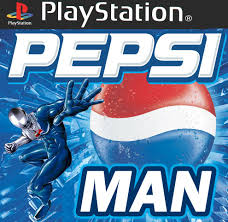 Pepsiman is a superhero who runs to people who are in need of drink.

The gameplay is skill-requiring and intriguing. Pepsiman automatically runs through locations while the player has to avoid obstacles in different ways in order to save the thirsty victim. To earn points, Pepsiman must collect pepsicans that are scattered around the map.